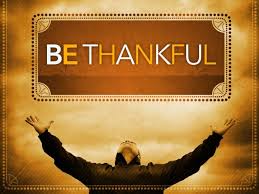 One day a construction supervisor from the 6th floor a building was calling a worker working on the ground floor. The worker did not hear his supervisor calling because of the construction noise.

This story brought to mind various situation in our lives. Very often God gives us gifts. Sometimes small, and at times big, expecting us to look up and say thank you. But then we just pick them without caring where they came from. But as soon as we are hit with small stones, as in problems. We look up immediately and complain to God. How often do we turn to God immediately to thank him each time we receive gifts from him?

3 Replies to “THANKFULNESS – A VIRTUE”